The Outstanding Service Award was established by the RMA Board on September 1, 1984 for the purpose of recognizing any member or non-member who has made outstanding contributions to enhance the presence, image, goals and well-being of the RMA over a number of years.  This award recognizes members who might not be officers, directors or even committee heads.  It brings to our attention RMA members who, over time, have made a significant contribution to the overall success of the organization. 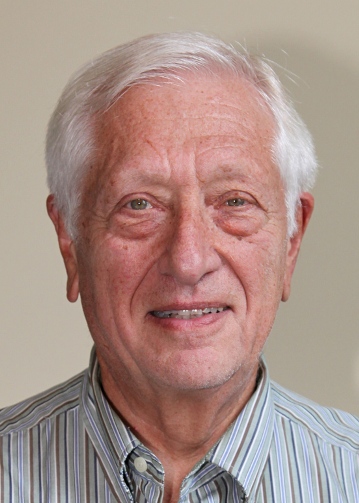 Arnold Gordon is a man who rarely says no when asked to help do something. He joined RMA in January of 2012 and since then has contributed his time (actually 513 total hours– 362 outside & 142 inside – during 2019) and wisdom, and wonderful sense of humor to the RMA cause. Over the years, he served on the Board of Directors, actively participated in the Program Committee, became a recorder at the volunteer desk and today is our weekly coordinator of good humor. He is also a CBB Scribe and served on a special committee to recommend changes to our new membership process.

While Arnold Gordon spends part of the year in Florida, he still manages to achieve more things for RMA in just part of the year than most men. He helped organize our Limerick Contests and Clerihew Contests (a short comic or nonsensical verse, typically in two rhyming couplets with lines of unequal length and referring to a famous person) which no one really understood but we all laughed and applauded none the less. He was one of the members who helped establish the mentoring program and always seems to have some insight to contribute about a broad range of topics. He is respected for his wisdom as much as he is for hosting assorted frivolous contests like the most outlandish tie contest at our Christmas Meeting. 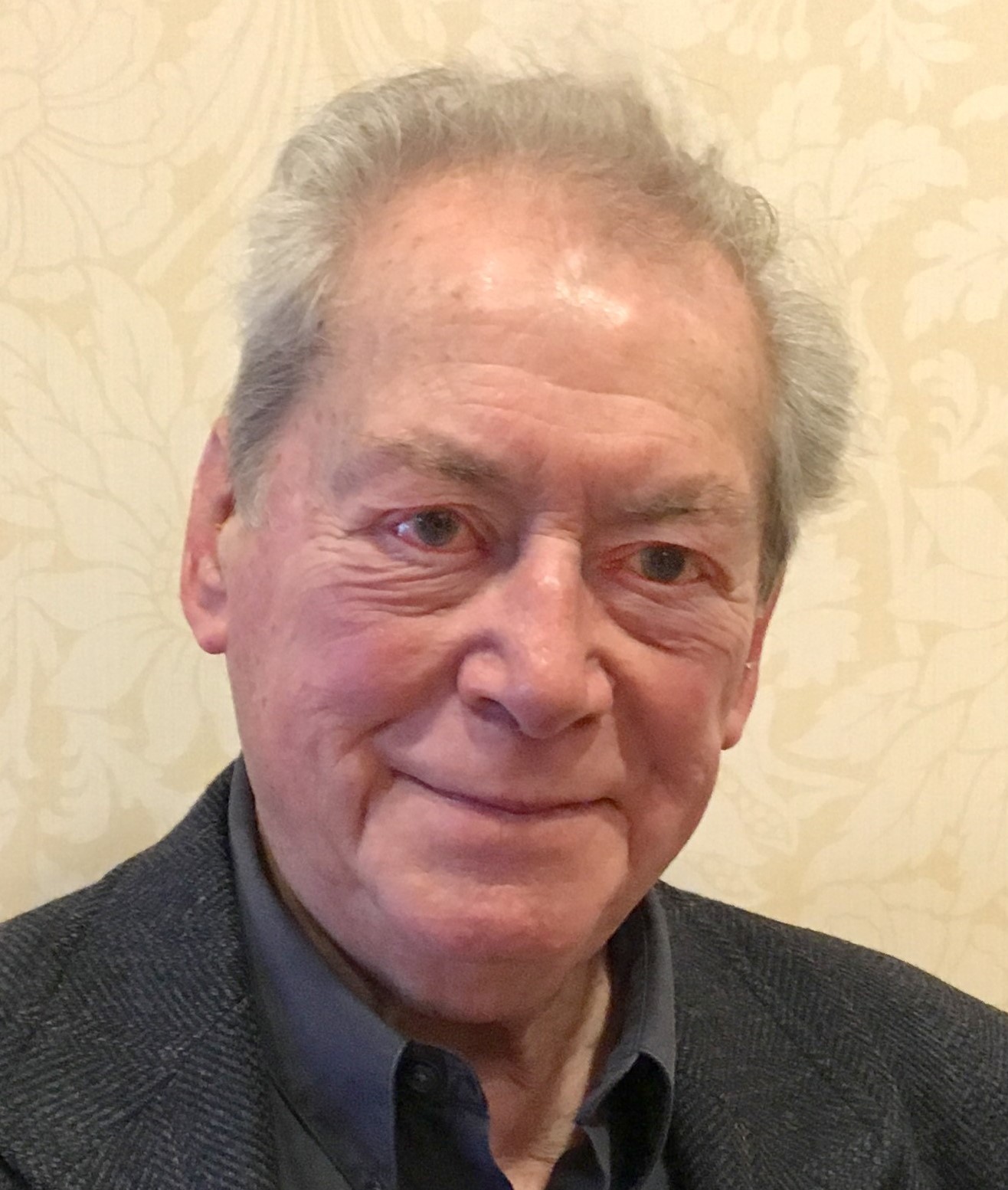 Chet Risio is over 90 years of age this year …although you would never know it from all that he does. Chet acts like a 70-year-old energy bunny. He joined RMA in January 2013.

Chet is no withering flower. After being inducted, he became a CBB scribe….a job of some importance involving recording RMA doings from notes taken during our weekly business meetings. After a period of time, he took over the leadership role as Chairman of the Cigar Box Bulletin Standing Committee. This meant he not only scheduled the scribes but was their chief editor and responsible for seeing that the CBB was produced and published regularly every week. He stepped down from that job only during the fall of 2019.

One day, he had a brainstorm. Frustrated that so many good men seemed to have such good stories to tell about themselves, Chet set up the RMA Member Profile program. This series, which appears monthly in the CBB, is intended to allow RMA members to get to know one another better. Sadly, more often than not we would get to know more about a member from his obituary than during his lifetime. Chet changed that. His member profiles draw out those stories we are usually missing in our regular conversations. So far, he has published 33 Member Profiles.

Chet more recently had a second brainstorm, stating that: We have all had incidents in our lives that shaped us, brought us joy or conflict, gave us a direction we had never contemplated, incidents where we came out as heroes or victims. Thanks to Chet Risio, RMA has started a new program that reflects those incidents, allowing members to share funny or sad experiences as told to our members. He calls these “Human Interest Stories” where a Member steps before us all on a Wednesday morning and relates a significant incident in their lives in about five minutes.

These two programs have been extremely well received by the members and added a wonderful dimension to our understanding of one another. Chet is one of those fellows who is regularly contributing to RMA and we are using the Special Service Award to recognize his efforts. 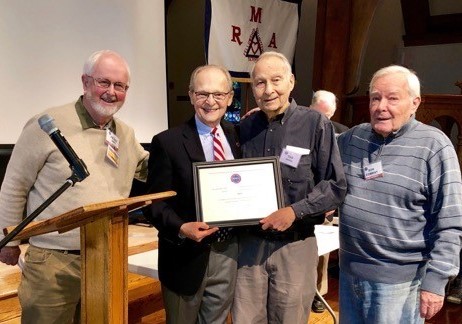 (photo, L to R) Peter Uhry, Ralph Viggiano, Ted Spool, Don Conway
Ted is a classic recipient of this award. He is a quiet doer. The selection committee, composed of the past three RMA Presidents, felt that Ted’s initiatives in the area of organizing and running the outdoor summer tennis programs alone merits his being an honoree. But Ted has given much more to the organization including demonstrating his technical skills behind the RMA video camera.
Ted is modest about what he has done and what he does. Even after illness set him back from playing racket sports, he continued to contribute to the camera work and make his presence known at meetings. 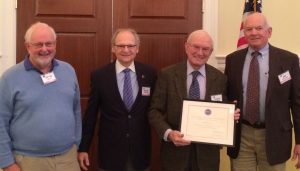 (photo, L to R) Peter Uhry, Ralph Viggiano, Steve Myers and Bob Phillips
Steve Myers grew up in Stamford.  He graduated from RPI in 1958 with a Bachelors degree in Physics and worked as a Perkin Elmer scientist for 25 years.  He obtained a PhD in Physics from New York University in 1976 and later developed an instrument to analyze DNA.
Active in the Nuclear Freeze movement in the 1980s, he was elected president of the Greenwich Forum on War and Peace.  Steve later volunteered at Greenwich High helping students develop a wide variety of instruments in order to compete in national and international science competitions.   Steve serves on the Science Committee and the Board of Directors of the Bruce Museum.
Within the RMA, Steve has organized numerous programs on scientific subjects including his talk on NASA’s Mars Rover “Curiosity” and a joint talk on “Proving Einstein Right on Gravity Waves and Relativity Theory”.  He has sponsored speakers from the Lamont-Doherty Laboratories, arranged two RMA Special Events trips to the Lamont labs and sponsored numerous science presentation at the RMA.  He has been active behind the scenes editing videos of RMA speakers each week and as a member of the technical team for our meetings. 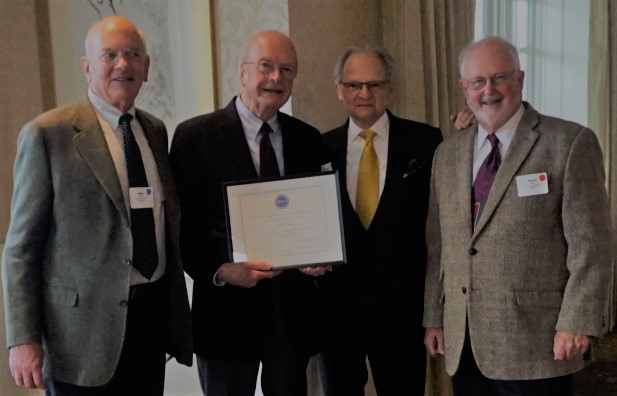 (photo, L to R) Bob Phillips, Mike Ryan, Ralph Viggiano and Peter Uhry
Mike grew up in Northern California. He graduated from Saint Ignatius College Preparatory in San Francisco in 1955 and then went on to obtain degrees in Political Science from  Santa Clara University and in International Marketing from the Thunderbird School of Global Management. Mike also attended the University of Grenoble in France.
His professional career began with stints at Pan American World Airways in San Francisco and Radio Menag in Marseille, France.
In late 1964, Mike joined Texaco where he had a 35 years career, 22 years of which were spent abroad beginning with 15 years in French speaking West African countries and followed by 7 years in London. He held various downstream marketing positions in Africa followed by managerial assignments with Texaco’s International Sales Department in both London and in the United States selling jet fuel to airlines throughout the world. Mike retired from Texaco in 1999.
In retirement, Mike has been active in various volunteer activities. He is a past president of the RMA with membership going back to 2000 and 10 years service on the RMA board. Mike also is a past president of Call-A-Ride and to date has been a driver for 17 years with that organization. He volunteered for 13 years at Greenwich Hospital and for the past 18 seasons has been a backstage tour guide at the Metropolitan Opera.
Mike and his wife Susan have been married for 53 years and have two children and four grandchildren. 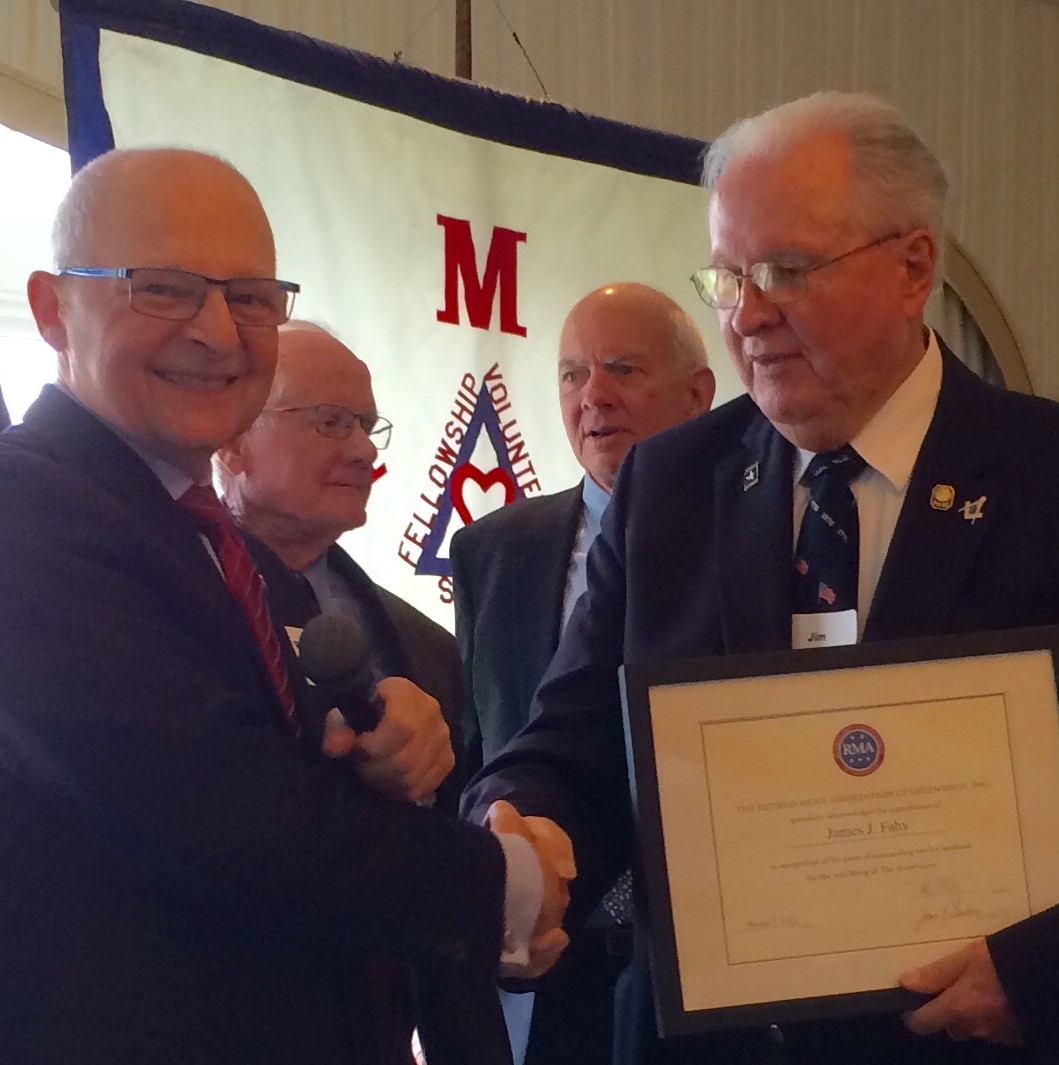 (photo L to R) Ralph Viggiano & Jim Fahy; background, Mike Smith &Bob Phillips
In recognition of Jim Fahy’s contributions to the RMA for over ten years. Jim is and has been the most prominent figure at RMA’s Annual Picnic, Annual Dinner and weekly meetings for over ten years. He is usually the first person we see waiting to greet us and he takes charge of all activities. His countenance assures us that our meetings are run in an orderly manner. Jim’s presence on the Board Of Directors was a welcomed addition to the many other responsibilities that adds to the RMA’s success. 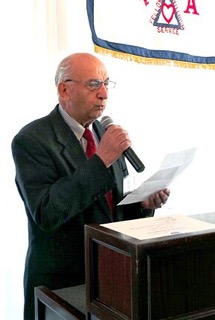 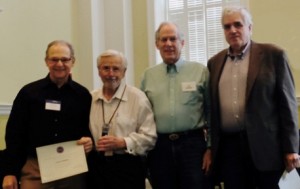